The name Dorward (also written as Durward) possibly derives from the position of Door Ward of the kingdom, which is keeper of the royal castles and palaces. In medieval Scotland the office of King’s door ward afforded the holder considerable prestige. The original Durward was the Earl of Atholl, a Celtic noble who married a bastard daughter of King David (1230’s).

Margaret Phillips appears to be the daughter of James Philip and Barbara Spence who had ten children between 1754 and 1775. I presume that Elizabeth Dorward and John Raitt’s eldest daughter and first born child, Margaret Phillips Raitt, was named after her grandmother.

In the 1841 census living at 18 Hannah St, Arbroath Lady Loan, is John Raitt, aged 35, Merchant Seaman, with wife Elizabeth, age 30; daughter Margaret, age 7; sons John, 3 and James, 8 months; and John’s sister Susan (35), who was presumably staying there while her husband was away at sea.

In the 1851 census for Ladyloan, living at 15 Hannah St is Elizabeth's mother Margaret Dorward (nee Philip) and two of her son’s David (56) and James (45) - both unmarried seamen.

In the 1871 census for Arbroath, Ladyloan, still living at 18 Hannah St, are Elizabeth Raitt (63) and her husband John Raitt (65, store keeper, shipbuilding yard). They are living in two rooms with one or more windows.

The tree below shows some of the family members of Elizabeth Dorward where known starting with her father (I intend to look further into the families of her siblings.) There are other Dorwards (descending from John Dorward born about 1650) who were initially believed to be Elizabeth’s ancestors, but my research has shown that this appears not to be the case. There may well be a connection with this other Dorward tree and this is being currently explored - as are the families. 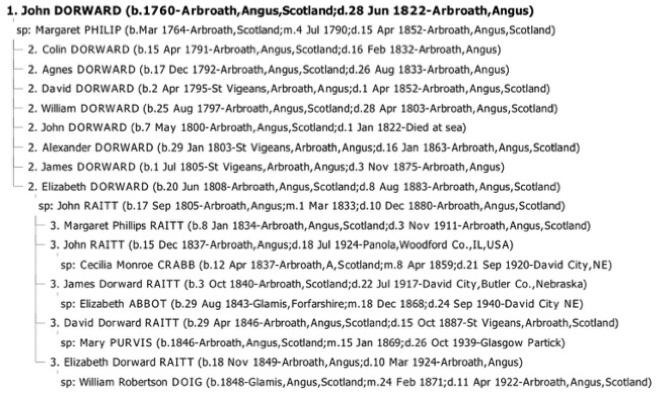