My mother’s mother was Jane Lindsay, born on 2 October 1885 at Knowhead, Menmuir, near Kirriemuir in Forfarshire (Angus) where her father was farm grieve. She was the eldest daughter and second child of James Lindsay and Eliza Jane Drummond who married in Little Brechin, Angus in 1881.

Jane was a domestic servant and had a son called Kenneth Lindsay Ormonde who was born on 21 June 1906 at Newton of Inshavan, Tannadice. His father was John Ormonde, an ironmonger, living at 69 Dundee Loan, Forfar. Shortly after the birth, Jane moved (was sent?) away and Kenneth was brought up by his grandparents James and Eliza Lindsay. 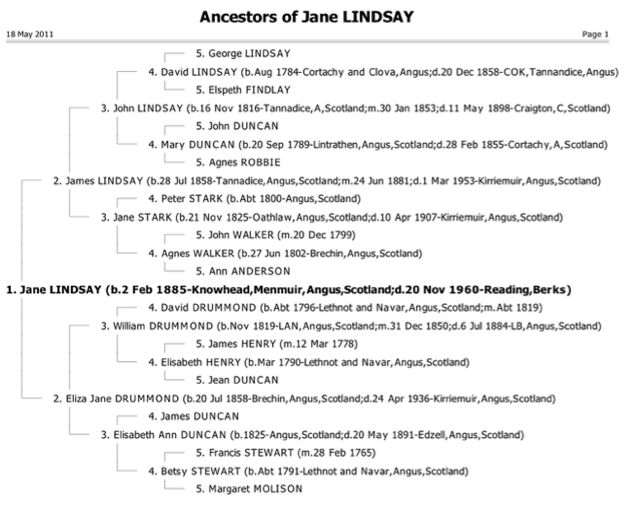 After a time in London, Jean and her husband moved to Rotherham in Yorkshire (where their two daughters were born). The family left Yorkshire in the mid-1930s and Herbert served as butler to Captain and Mrs Charles at Buscot in Bradfield in 1938. His wife Jean was housekeeper. The census taken right at the start of the 2nd World War in 1939 reveals that in the Charley household at Buscottage, Bradfied, Berkshire there was Herbert G. Taylor, born 22 March 1887, married, occupation butler; Edith L. Charley, born 8 Jan 1868, married; Margaret I. Vaughan, born 27 Aug 1862, widowed; Joan Taylor, born 2 Oct 1885, married, housekeeper; and a currently closed entry which is presumably Herbert and Jean's youngest daughter Aileen, 17.

The tree below show the ancestors of my grandmother, Jane Lindsay.

During the 1st World War, Jane (always known as Jean) and Rita used to go to musicals and were present at the performance of Harry Lauder when he got news that his only son, John, a captain in the 8th Argyl and Sutherland Highlanders had been killed in action at Poiziers, France on 28 Dec 1916. Harry kept on singing with tears streaming down his face. He wrote the song Keep Right on to the End of the Road shortly thereafter in memory.

When my maternal grandparents lived at Sulhamstead, Jane became friendly with the lady’s maid (called Mademoiselle) of Lady Hood, wife of Admiral Lord Hood (after whom the battleship was named). Lady Hood, and her companion Miss Mona Power, took a liking to Jane and she accompanied them on several trips to Le Touquet, France and then to Washington and New York in 1948. She sailed over on the Queen Elizabeth, stayed for three months, and sailed back on 9 December. In her letters home she marvelled at the yellow taxis, the skyscrapers and the quantities of food that were available. I hope to transcribe some of these.

Jean Taylor, aged 63, is registered aboard the Queen Elizabeth, travelling First Class, departing Southampton on 16 September 1948 and arriving at the port of New York on 21 September 1948. Her luggage consisted of one trunk (T), one suitcase (SC) and one other (HP). Her travel document was number V. 397338 (British nationality) and a head tax had been collected from her. Her destination in New York City was 35, W. 54th Street. The same address was given for Mona Power, who travelled with her. Mona, aged 60, had the same travel document number and one trunk and four suitcase. However, Lady Ellen Hood, aged 76, also travelling on the same ship, gave as her destination c/o Post Office Square, 10, Boston, Mass. (this was the address of her Fiscal Agent, Fiduciary Trust Co.) Lady Hood had four trunks, seven suitcases and 5 HPs!

Interestingly, the list of alien passengers embarked at Southampton on 16 September under contract ticket number W. 43249 has the three passengers, however, whereas Ellen Hood and Mona Power’s names are typed, the name of Jean Taylor is written in pencil over another name that is crossed out (it appears to be L. Jahta) - whether this means that this person (occupation given as a maid, age 29 - was this Mademoiselle?) was supposed to be travelling with Lady Hood and Mona Power originally and Jean Taylor took her place is open to conjecture. In any event, the last address in the UK before travelling for all three was the Ritz Hotel, London.

Jean Lindsay, age 63, travel document V.397338, returned to the UK, apparently alone, aboard the Queen Mary - sailing from New York to Southampton on 9 December 1948. I am unable yet to find the date and details of her arrival in England. And my grandmother brought me a little miniature model of the Queen Mary which sadly I no longer have. Lady Ellen Hood and Mona Power travelled back together from New York to Southampton aboard the Queen Mary on 14 September 1949. Lady Hood travelled in fist class - her age was given as 77 and her proposed address was the Hyde Park Hotel in London. Mona Power's age was given as 61 and her travel document number this time was RP. A7136976. Her destination was not recorded.

Although not strictly relevant, though because my grandparents, mother and aunt were clearly well-known to Lady Hood, it was interesting to discover that Ellen Hood was actually an American citizen, born in Burlington, Des Moines, Iowa on 13 February 1872. Her father, Albert Edward Touzalin, was English and her mother Ellen Floyd, was American - from Maryland. She visited the UK as an 18 year old tourist in 1892 (she was at Harvard University in 1802) and having returned to Boston married George Nickerson in 1893 and had a couple of children with him. Later as a widow, she married Horace Lambert Alexander Hood, in Burlington on 19 January 1910. The couple obviously moved to England almost immediately because she became a naturalized British citizen in 1910 and in the 1911 census for Ryde House, Isle of Wight, she is living with her husband Horace Hood, 40, Captain, Royal Navy with her two children from her previous marriage, her infant son Samuel Hood, an Austrian governess/teacher, and no fewer than ten domestic servants (including a footman, a boy, a cook, a children’s maid, a nurse, a kitchen maid, a scullery maid and two housemaids!)

Ellen Hood, widow of George Nickerson of Boston, USA and of Rear-Admiral the Hon. Sir H. L. A. Hood, K.C.B., D.S.O., M.V.O. died on 1 October 1850 at the Annex to the Guildford Hotel, Sandwich, Kent. Her last known address in the United States was the Wardman Park Hotel in New York and she had been travelling in Europe since September 1949. The executors of her estate, worth £6221 12s. 9d. were her two sons Viscount [Samuel] Hood and the Honourable Alexander Lambert Hood.

In her early twenties Jane (also known as Jean) moved to England where she was courted by husband-to-be Herbert George Taylor. In August 1910 she was living at Inglenook, Laleham, Staines - the home of Rita Macbeth Raeburn (who later married architect Archie Campbell Cooper). Rita was the daughter of Scottish and Royal Academy painter Henry Macbeth-Raeburn (1860-1947). His father Norman Macbeth (1821-1888) was also a painter as was his brother Robert Walter Macbeth (1848-1910) and daughter Marjorie May Macbeth Raeburn (1902-1988). In 1911 the Raeburn family, including Jane, moved to 51 Gower Street, Bedford Square, St Giles, London. In 1912 when Jane married Herbert George Taylor, it was Rita who organized the wedding.

The two sister ships Queen Elizabeth and Queen Mary both had an interesting history. Operated by the Cunard White Star Line, the Queen Elizabeth was the largest passenger luxury liner ever built at the time and provided luxury liner (and mail) services between Southampton and New York via Cherbourg in France. The vessel first entered service as a troop carrier in 1940 and only started her intended role as an ocean liner in 1946. With the decline in transatlantic liner transportation in favour of aeroplanes, the Queen Elizabeth was sold in 1968, initially as a tourist attraction in Port Everglades, Floria, but later she was to be converted into a floating university in Hong Kong. A spectacular inferno engulfed the ship in 1972 and she was completely destroyed, the hulk being dismantled for scrap in 1974-5 - though not before the charred wreck featured in the 1974 James Bond film, The Man with the Golden Gun. The Queen Mary commenced an express service between Southampton, Cherbourg and New York in 1936 and continued until 1967 before being retired. She was converted into a troop ship for the duration of the 2nd World War. Upon her retirement from service, she sailed to Long Beach, California where she remains permanently moored as a tourist attraction, restaurant and hotel. I visited her some years back and it was really quite emotionally to walk along the decks and gangways and see the preserved cabins in the knowledge that my grandmother had walked those very same decks.