in Arbroath and St Vigeans

1855 – erected by Isobell Raitt in memory of her husband George Simmers who died August 12 1847 aged 51 years.  Their sons George and Alexander who died young.  The above Isobell Raitt November 14 1862, aged 73 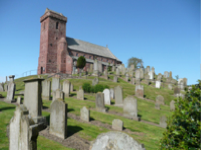 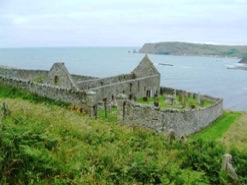 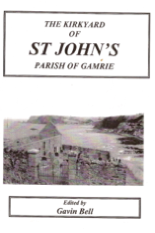 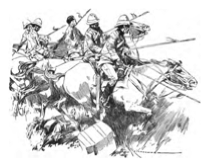 In hopes of a joyful Resurrection

Here rests the body of

Late of this Parish,

Principall Officer of his Majesties Customs

He was a Person that on all occasions promoted

the Publick good of this Colony, and severall

times generously and successfully ventured his

Life in defense of the same.

He was a kind Husband,

A Religious constant worshipper of God.

He was born in London

Arrived and settled this Country

And dyed suddenly but not unprepared

This Stone is placed here in memory of Robert Rait, burges of Forres, 1728, who died Nove. the 9th, 175?, aged 70, and Elizabeth Sinclair, his spouse. “For a day in courts is better than a thousand. I had rather be a door-keeper in the house of the Lord my God than to dwell in tents of wickedness. Memento Mori.

departed into Eternity upon the 13th April 1800 years, after he had troad the stage of Time for the space of 70 years:

At Angel's voice and Trumpet's sound.

Shall dust arise, and bones be joined.

Under this stone is laid all that was mortal

In the kirkyard of St John’s. parish of Gamrie there are a number of gravestones pertaining to putative ancestors.

This stone is erected in memory of William Sangster, sometime shipmaster in Gardenstown, who died July 6th 1786, aged 63 years; and of his children John, James, Peter, William, Isabel and Margaret Sangster who all died in youth. Margaret Nicol, spouse to the above William Sangster, died 7th Octr 1803, aged 76 years.

This stone is erected by James Ranken in Middel Town, to the memory of his spouse Elisabeth Sangster, who died the 6th December 1796, aged 30 years; and Mary Murison, his spouse, who died the 17th of Nov 1806, in the 42nd year of her age. Here also is interred the said James Ranken, who departed this life the 4th of April 1824, aged 78 years. Here also is interred the remains of Mary Massie, spouse to the above named James Ranken, who departed this life the 22nd January 1844, aged 50 years.

This stone is erected by Patrick Sangster, shipmaster in Gardenstown, to the memory of his children: Patrick, who died Feby 4th 1765, aged 4 years, and John, who died April 30th 1765, aged 1 year and 6 months.

When low in dust

The soul doth dwell on high.

At your childrens' death

The flowers which bloom in spring

Are first cut off.

In the hope of a blessed resurrection here ly interr'd the remains of  John Sangster, farmer in Minneny, who departed this life on the 23rd of Febry 1775, in the 70th year of his age; and of Elspet Smith his spouse, who died on the 24th Decr 1778 aged 71 years. In  testimony of their filial affection and grateful remembrance of the best of parents, this stone is erected by their surviving children. Also John Sangster, sometime in Knowhead, who departed this life the 5th of January 1791, aged 63[?] years.

Sacred to the memory of Elizabeth Sangster, spouse to William White, shipmaster in Macduff, who departed this life 29th August 1804 in the 22nd year of her age. Also Margt. Alexander White their daughter, who died 5th December 1805 aged 2 years and 3 months.

This stone is erected by Willm. Bartlet, Afforsk, to the memory of his spouse Isabel Sangster, who departed this life May 30th 1792 aged 30 years.

Erected by Barbara B. Sangster in memory of her husband Alexander Bartlet, son of William Bartlet and his wife Ann Strachan, born at Afforsk 19 May 1819 and died at Home Farm Eden 1st April 1888. The said Barbara B. Sangster, born at Minonie on 23rd January 1815, died at Banff on 13th January 1914.

A tablestone near the churchyard gate is inscribed:

The inscription has been added to in a later gravestone:

A headstone alongside the above has the inscription:

Erected by their affectionate family over the remains of James Rait, born September, 1786,

We shall meet again.

Also of their son James, for 31 years land steward at Castle Forbes, who died at Oakbank,

1867. The above named with their ancestors were tenants of Dalweary, Kintore, it is believed for 400 years.

A tablestone alongside the two above bears:

Here lies in hopes of a blessed resurrection (Untill the time that Christ shall say. Arise ye

dead and come away), Alexander Rait, some time farmer in Brae of Kintore, who was born

A flat slab, with a carving of the Rait arms, initialed A. B., was discovered when clearing out the nave of the old kirk in 1873. It bears the following inscription rudely incised along the margin of the stone:

And have my God my friend.

Than trust in men of high degree,

And on their truth depend.

And breath a fellow feeling o'er this stone.

In memory of Mr Archibald M'Lean, road contractor, a native of the parish of Killin, who died

Here rest in the Lord my dear parents, Mr James Rait, a true minister of the Gospel, who, for 25 years, presided faithfully over this church, not without great benefit, and then exchanged life for death, 1st May 1642, at the age of 59; and his beloved wife Isabella Blackburn, who died 19th Jan. 1637, aged 32. Erected by their son, W. R.

A flat stone (16) has the initials PD/KR flanking a heart and sailing ship. It gives the name of (someone) Davidson, burgess in Bervie, who died on 20 Dec 1634. The stone bears a central shield with the Rait coat of arms in base. K. (probably Katherine) Raitt was presumably Davidson’s wife.

A slab (with the text, Eccl. xii., cut in Hebrew characters, together with mortuary emblems, M:I.R:I.R., &c ), bears the following remains of an inscription in Roman capitals:

Under this stone were laid the remains of the Rev. John Rait, a clear and eloquent preacher of the Gospel in this church, who was previously three years in Montrose. He rested from his labours 1st Dec. 1685 A.D. in the 62d year of his age, &c.]

Monument for Rait of Anniston (Inverkeilor)

The family of Rait of Anniston bury within an enclosure near to that of Gardyne. The Rait

enclosure contains a freestone monument, which encases a graceful group in marble, representing the spirit of consolation, in the form of a female figure, ministering to the support of a person in sickness.

Upon the upper part of the monument is inscribed:

and of his wife, Elizabeth Guthrie, daughter of James Guthrie, Esqr. of Craigie,

home on sick leave from the 1st Madras Cavalry; Murray died at Anniston, 1819.

James, who erected this monument, is the only survivor.

On the lower part is the following:

There are also a plaque relating to the family inside the kirk.

Above the kirk door are the arms of Rait (Or, a cross engrailed [sable]) impaled with Ogilvy ([Argent], a lion passant guardant [gules] crowned [or]), for James Rait of Anniston and the Hon. Clementina Ogilvy, daughter of David 7th earl of Airlie. Motto: "Spero meliora" - "I hope for better things".

Beneath lies buried, with six of her children, Elizabeth Bettie, first wife of Mr John Rait,

Two compartments (below a Latin inscription), present figures, incised, in the style of Holbein's Dances of Death. These are described by the Rev. Mr Hay as follows:

"In the compartment on the right are two figures, a male and female, evidently, by the dress of the male figure, intended to represent John Rait and his wife. Death, in the usual form of a skeleton armed with a dart, is forcing his way between the two, and pushing them asunder. This compartment or panel, bears these inscriptions: below “Congugium carnale” (the carnal marriage), above, “In morte dividimur” (in death we are divided.)

The other compartment has the same two figures, representing the same persons; but in

addition to the gown and bands which distinguish the minister as in the above panel, he and his

wife are both now represented with wings indicating that they have attained the spiritual state, and are trampling Death, the same figure that was thrusting them asunder before, under foot. This panel has the inscription below, “Conjugium geternum” (the spiritual and eternal marriage), and above, “Omnia vincit mors Christi' (the death of Christ vanquishes all.)

will give me the wings of a dove ?)" Across the width of the stone, under both panels, is inscribed the same motto which appears upon a tombstone at Dun.

The old burial-ground which is within the deer park, and to the west of Kinnaird Castle, was enclosed, some years ago, by the Earl of Southesk. It contains a number of tomb-stones. One bears a bold carving of the Rait arms, and this inscription in raised Roman capitals:

Heir lyes Henrie Rait, son to Mr David Rait, minister of this place, who departed this mortal life in the 18 year of his age, October 1669:

The tender grse it springs, it flovrs, it fades.

Frail mans like grase, his life a day, and most

Rvn ovt his race, and be disolved in dvst.

From a marble monument within the church:

Here lyes the Body of George Dempster of Dunnichen, Merchant in Dundee, who died 2d June

While we have time and space here on the earth.

Let us prepare ourselves, for th' hour of death ;

Inscription in Latin. On one side has WR CM – arms of Raitt and Milne (Christian Milne/Mill his wife).

Passenger, let this stone raise in you the memory of William Rait, a man of great piety and

goodness, shining among the prime citizens with us, as having been honoured several years with the office of a baillie, no less dear to his neighbours than to his own, now escaped out of the prison of his body, as above. He died 13 Dec 1674 (1670?), aged 57.

Beneath this stone, all here entombed lye

Noe wonder, here within this tomb you see.

Whose rest from wordly cares does pleasant prove,

While his immortal soul triumphs above.

Under flat stone 477/2 with the inscription “Hair lyis ane godly woman...” is

Barbara Baldovia who died March 1624 age 52. She was the wife of Henry Guthrie,

merchant, mariner and burgess in Dundee. The stone is primarily of interest because,

together with the inscription, it bears the arms of Lindsay, Lyon, Ogilvy, Scrimgeour,

unreadable, and Rait (the cross engrailed being clearly visible).

Stone for Margaret and Charles Raitt (The Howff, Dundee)

Stone for Helene and Master Andrew Raitt (The Howff, Dundee)

Stone 1003, greatly decayed, but containing dates in the 1610s, mentions Helene Rait, daughter of Margaret Fullertovne, daughter to the Laird of Denoone (Dunoon), who died in March 1612, aged 20, before her mother, who died on 22 March 161?. Margaret seems to have been the wife of Maister Androve Rait of Svlliflite (Sillyflat - near Inverbervie)

of his ministry. He was translated to Lundie from Dundee, in 1806, where he had been minister of the Cowgate Chapel since the spring of 1773. He was a man uncommonly regular and philosophical in his habits, and of uncommon worth and benevolence of character. Erected by his cousin Wm. Porterfield, St. Andrews.

Upon Chest tomb 35 in Kinnell there are two cherubs and crown and the inscription:

Jas Raitt; Elisabeth Low; 1756; here lyes the dust of Jas Raitt sometime tent in Chappeltown of Boysock and husband to Elis Low by whom he had seven children; Elis and David here interred, John, Jean, Kath, Jas & --- alive at this date. He died 21 Feb 1755 aged 66. 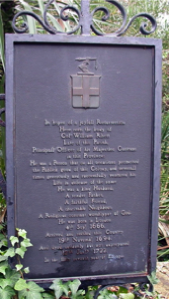